When new banknotes and coins whose denominations were identical but designs and sizes differed, were issued, their classification titles used to be '原‘, ’新‘, ’改‘, ’改甲‘ (in the order of issuance). However, since May 1, 1993, the classification titles of banknotes issued since the Third Currency Reform in 1962 have become 'Ga' (first), 'Na' (second), 'Da' (third), 'Ra' (fourth).

From 1962, the government carried out a series of five-year economic development plans. Another Currency Reform was carried out on June 10, 1962 to support the initiatives and to channel hoarded wealth into industrial development. New won-denominated currency, which had a face value ten times higher than that of the hwan-denominated currency, was issued as legal tender, and the circulation of and transactions in hwan-denominated currency were prohibited (However, 50- and 10-hwan coins remained in circulation until March 21, 1975). Under the Currency Reform, the Bank of Korea issued new notes in six denominations: 500-, 100-, 50-, 10-, 5- and 1-won. Furthermore, the Bank introduced into circulation 50- and 10-jeon notes to provide change notes for low value transactions on December 1, 1962. Accordingly, after the Currency Reform in 1962, eight denominations were in circulation in Korea, including the 500-, 100-, 50-, 10-, 5- and 1-won notes and the 50- and 10-jeon notes. Subsequently, the Bank of Korea issued new notes several times in the same denominations but with different designs. The Bank replaced 50- and 10-hwan coins, that had remained in circulation as an exception under the ordinance on temporary measures for the circulation of coins, with newly issued 10-, 5- and 1-won coins on August 16, 1966. Although failing to accomplishing its intended economic goal, the Currency Reform in 1962 is important in the history of money that it introduced the won-denominated currency still in use. Furthermore, banknotes and coins issued prior to the Currency Reform in 1962 are no longer in circulation and accepted as legal tender, while all currency issued after the Reform is legal tender.

After the Currency Reform in 1962 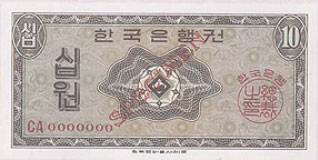 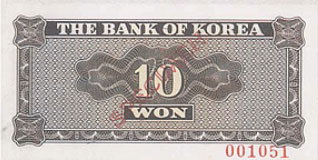 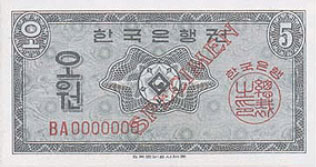 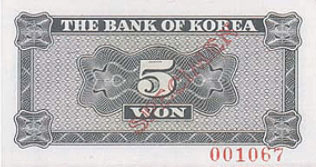 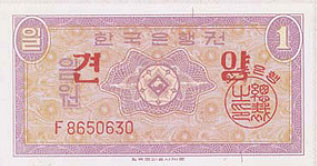 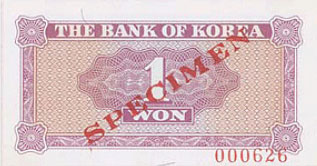 August 28, 1962
Ordinance on temporary measures for the circulation of coins proclaimed and implemented 50- and 10-hwan coins remained in circulation at one tenth of their face value in won. 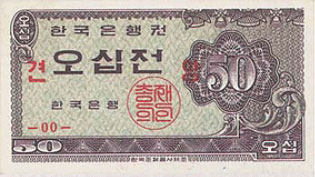 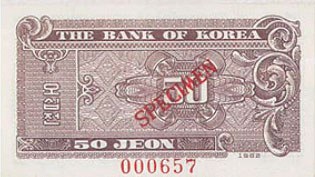 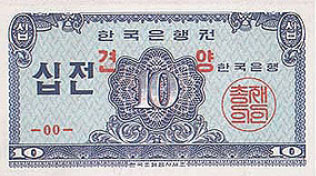 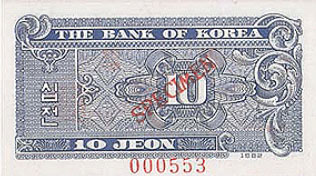