The Bank of Korea also extended and reformed its existing lending facilities to turn them into lending and deposit facilities, by newly introducing Liquidity Adjustment Loans and Deposits, the standing facilities, in March 2008.

The Bank of Korea's regular lending facilities currently include ① 'Liquidity Adjustment Loans,' provided to financial institutions experiencing fund shortage in the process of their fund supply and demand, ② 'Bank Intermediated Lending Support Facility', support given up to a certain ceiling taking into account financial and economic conditions and the financial trends of small and medium-sized enterprises and regions, etc,and ③ 'Intraday Overdrafts,' provided to financial institutions facing temporary shortages of funds for settlement until the daily funds-transfer business closing. These loanscan beimplemented in the form of bill rediscounts or securities collateral loans, with the types of collateral including credit securities, government and public bonds and Monetary Stabilization Bonds.

Additionally, in accordance with the Bank of Korea Act, the Bank can conduct credit operations with financial institutions at times when liquidity deteriorates due for example to imbalances between financing and use of funds, and also with for-profit enterprises when severe impediments to obtaining funds from financial institutions occur or when there is a strong likelihood of their occurrence.

Meanwhile, the Bank of Korea also operates 'Liquidity Adjustment Deposit' facilities, which enable financial institutions to deposit their excess cash arising in the process of their supply of and demand for funds.

Liquidity adjustment loans and deposits are standing facilities that enable financial institutions to borrow from the Bank of Korea to make up for shortages of funds, and to deposit any surplus funds with the Bank of Korea. They were introduced and implemented from March 2008.

The interest rates on liquidity adjustment loans and deposits are 100 basis points above and below the Bank of Korea Base Rate, respectively. These loans and deposits thus serve to prevent the call rate from deviating too widely from the Base Rate in the call market where short-term excesses and shortages of funds among financial institutions are addressed.

Meanwhile, the liquidity adjustment loan and deposit interest rates can be adjusted to the same level as the Base Rate, and the loan maturities can be extended to as long as one month, if the Monetary PolicyBoard finds this necessary to ensure smooth functioning of the financial markets.

Bank Intermediated Lending Support Facilityis low interest rate loan extended by the Bank of Korea to banks based on their SME loan performances, etc, up to a ceiling set by the Monetary PolicyBoard in consideration of financial and economic conditions and regional as well as small and medium-sized enterprise financial trends.

The interest rates on Bank Intermediated Lending Support Facilityare generally kept lower than the Base Rate, so as to strengthen the incentives for banks to lend to SMEs and some other enterprises. The loans have maturities of one-month. 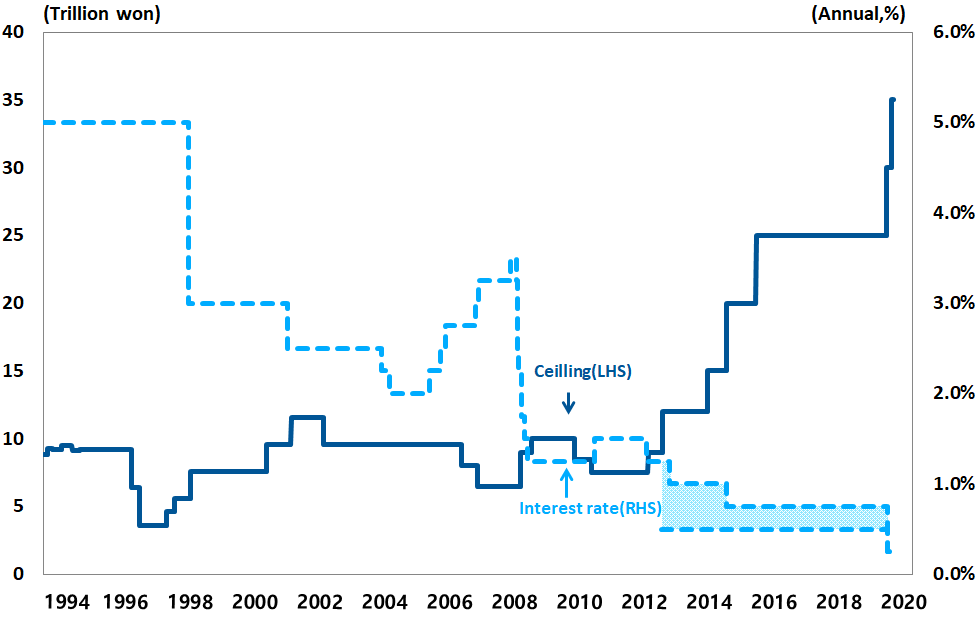 Intraday overdrafts were introduced in September 2000 to extend financial support to banks experiencing temporary shortages of settlement funds in the course of a day. They thus serve to stimulate fund transactions among financial institutions and, as a result, among corporations using those institutions.

Financial institutions that are subject to reserve requirements and participate in BOK-Wire are eligible for intraday overdrafts. In the case where a bank fails to redeem its borrowings by the close of the business day, non-redeemed intraday overdraft amount is converted into a liquidity adjustment loan.

These loans are in principle provided on an interest-free basis. To avoid an increase in settlement risk arising from financial institutions' over-reliance on them, however, a certain level of interest is applied on loans exceeding 25% of a financial institution's equity capital ― at a rate equivalent to the spread between yields on three-year Treasury bonds and the uncollateralized overnight call rate during the last month of the immediately preceding quarter.

The Bank of Korea may extend special loans to not only financial institutions but also for-profit enterprises in the event of an emergency as stipulated under the Bank of Korea Act. Special loans include emergency credit tofinancial institutions (Article 65) and credit to for-profit enterprises (Article 80).

Emergency credit tofinancial institutions may be extended with concurrence of at least four members of the Monetary Policy Board, against the collateral of any assets temporarily defined as acceptable securities in either of the following cases: ① in the case of financial institutions’ liquidity deteriorating due for example to imbalances between financing and use of funds; or ② when financial institutions are expected to experience pronounced difficulty in carrying out their operations due to temporary shortages of funds for payment caused by a breakdown of an electronic information processing system or other accidental mishap.