The Bank of Korea undertook the Third Currency Reform in 1953 in an effort to lessen the economic turmoil caused by the Korean War. The Bank mandated the acceptance of its banknotes as the sole legal tender to ensure the identity of Korean currency and strived for continued development of the Korean currency system.

The Korean War paralyzed production activities, and huge military expenditures led to severe inflation. To lessen these economic turmoil, the Currency Reform was carried out on February 15, 1953, on a 100-won to one hwan basis. The Bank of Korea then prohibited the circulation of won-denominated Bank of Korea notes. It also halted circulation of the Bank of Joseon notes in seven denominations (10-, 5-, 1-won and 50-, 20-, 10- and 5-jeon notes) and that of the Japanese government's subsidiary money (1-jeon coins), which had circulated alongside Bank of Korea notes, and designated the hwan-denominated Bank of Korea notes as the only legal tender, ensuring the integral unity of the Korean currency. The money issued under the Currency Reform in 1953 consisted only of banknotes, namely 1,000-, 100-, 10-, 5- and 1-hwan notes. New banknotes in different designs and colors were then issued several times until the Third Currency Reform in 1962. Meanwhile, as the economic hardships caused by the Korean War had been overcome to some degree, prices had stabilized and industrial activities had returned to normal, the Bank of Korea issued its first coins in three denominations ― 100-, 50- and 10-hwan coins ― in 1959 in order to improve the currency system, reduce its currency production expenses, and provide convenience in small value transactions.

February 17, 1953
The Bank of Korea 1,000-, 100-, 10-, 5-, and 1-hwan notes issued Although the currency unit was changed from won to hwan under the Currency Reform, "won" instead of "hwan" was marked on the initial banknotes, since these banknotes had previously been produced before the Currency Reform at the US Bureau of Engraving with a view to other purposes. 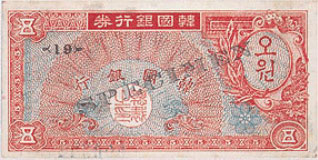 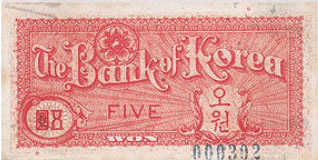 March 26, 1957
Second-design 1,000-hwan notes and third-design 100-hwan notes issued With this, the replacement of banknotes printed in the US by those of Korean manufacture completed except for the low denomination, 5- and 1-hwan notes.

April 19, 1961
Third-design 500-hwan notes issued
President Rhee's portrait on the previous 500-hwan notes was replaced by that of King Sejong the Great.

May 16, 1962
Fourth-design 100-hwan notes issued
A mother and her son holding a bankbook were chosen for the design theme to encourage a sense of thrift to implement the first five-year economic development plan.